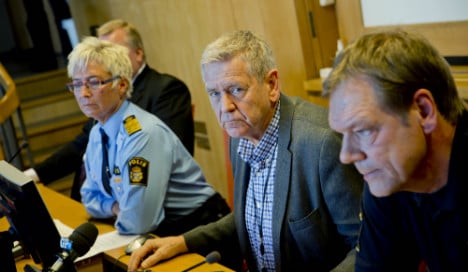 The arrests are related to a serious assault in the Bergsjön area of the Swedish city which has witnessed a slew of shootings and violent exchanges between rival gangs in recent months.

“Our understanding is that it was ten against one. We have classified the investigation as aggravated assault,” said Sven Alhbin at Gothenburg police.

The men were arrested in a series of coordinated raids at ten addresses in the city between 6.30am and 8.30am on Tuesday morning and have been interviewed during the course of the day.

“All those involved are people we have previously had contact with,” Alhbin said.

The police have furthermore confirmed that they are investigating a kidnapping following reports that two men have gone missing. The case concerns a 21-year-old from Gårdsten, missing since November 10th, and a 27-year-old man from Bergsjön, who went missing on November 17th.

Both of the men have had prior contact with the police. None of the ten men arrested on Tuesday morning are currently suspected of any involvement in the kidnapping.

“As far as we know at the moment, nothing suggests a connection,” Alhbin said.

The gang conflict in the city boiled over in September with a spate of shootings which began with the slaying of two men in the Hisingen area of the city on September 4th.

The two victims, aged 17 and 28, were taken to hospital but later died from their injuries.

The shootings were reported to be a way for gangs to mark their territory in the hashish market.