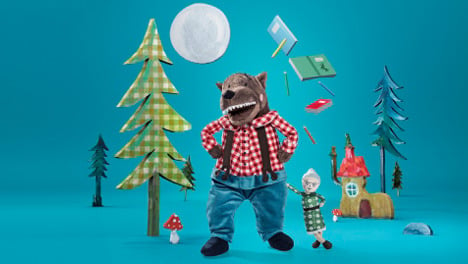 On its website, Ikea says the Lufsig plush wolf and other soft toys are "fond of play and mischief". Screenshot: Ikea

Hundreds of the stuffed toys, called Lufsig, flew off the shelves within hours on Monday and again on Tuesday, days after an anti-government protester threw it at the city's leader Leung Chun-ying during a weekend public meeting.

"Lufsig has been sold out at all Ikea stores this morning," a spokeswoman said, adding that there were queues before the store opened.

The innocent-looking toy depicts the wolf in "Little Red Riding Hood", and can be seen holding a stuffed toy resembling the grandmother.

Ikea's website said owners can use the toy — which has a Chinese name similar to a profanity in the Cantonese dialect — to recreate the fairy tale by rescuing the grandmother from the wolf's belly.

"The Wolf" is also Leung's nickname in a reference to what critics see as his untrustworthiness and cunning.

Ikea did not comment on the reason why the toy had become so popular.

"The toy was politically utilized by protesters targeting the chief executive so it has become a political symbol of opposition to the government," Sonny Lo, head of the Department of Social Sciences at the Hong Kong Institute of Education, told AFP.

A Hong Kong Facebook page dedicated to the toy wearing a red checked shirt with jeans has gained over 35,000 likes since it was created on Saturday.

Hong Kong returned to China in 1997 as a semi-autonomous territory with its own political and legal system that guarantees civil liberties not seen on the mainland.

Leung, appointed as chief executive by a pro-Beijing committee last July, is charged with overseeing the transition to universal suffrage to choose his successor in 2017.

But critics say China wants to impose a system which would bar some candidates from standing.

Leung has a support rating of 42 percent, according to a December survey by Hong Kong University.

He and his administration have been plagued by several scandals, including illegal structures at his luxury home and the resignation of one of his ministers who was found guilty of housing fraud.

Residents are also unhappy over soaring property prices, while a widening income gap has become a major concern.