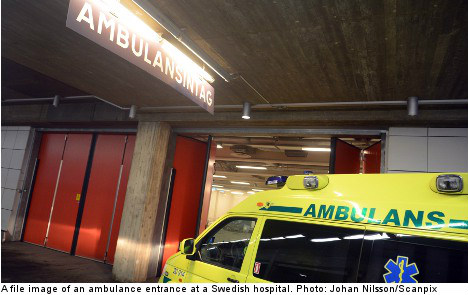 Despite feeling a crack in his neck as he fell, Åke Francke waited four days before seeking medical help.

"At night the pain started to come back and I couldn't move," Francke told the local Helsingborg Dagblad (HD) daily.

After the pain became unbearable, Francke went to his local clinic and was given a referral from the doctor for an emergency x-ray. However after a six hour wait at Helsingborg general hospital Francke was sent home without a scan.

Francke was told that the injury was probably whiplash or a strain and that nothing could be done.

"I then sat in a chair round the clock with a heat cushion and took painkillers. It was the only thing I could do," he said.

The following Monday, a full nine days after the original bathroom fall, Francke returned to the hospital and was finally given an x-ray which showed that he had sustained a broken neck. He was then rushed by ambulance to a hospital in Malmö.

Following an emergency operation Francke has been left with a long scar down the back of his neck but is thankful that he will be able to make a full recovery.

"I am just grateful that I didn't end up in a wheel-chair," he said.

The incident has been reported by Francke to the Patient Association (Patientföreningen) and the Health and Social Care Inspectorate (Inspektionen för vård och omsorg, IVO) and the hospital has pledged to cooperate fully with the investigation.

The case is the second high profile incident to emerge from Helsingborg general hospital in recent months. In September a man was reported to have died of a burst aneurysm two days before an operation which had been postponed twice previously due to a lack of hospital beds.

According to a report published last week by a Brussels-based Swedish researcher Sweden has the worst health system of any of the five Nordic countries. Sweden slipped from sixth to eleventh place among 35 European countries, with Denmark, Finland, Norway and Iceland all racing past it.

The report in particular had harsh words for waiting times in the Swedish healthcare system. It gave as an example that teenagers suffering anorexia at times have to wait six months for an appointment with a specialist. It also highlighted its concern that cancer patients were left to wait.