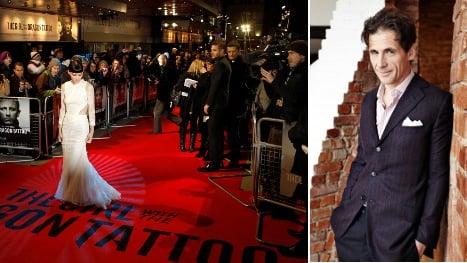 Lagercrantz, who ghost-wrote Zlatan Ibrahimovic's award-winning autobiography, was chosen by Nordstedts publishing house to pen a fourth book to accompany Larsson's blockbuster trilogy, which has spawned both Swedish and American films.

"I hope this will work out. It is amazing and I have already started writing, but it is a huge responsibility," Lagercrantz told Aftonbladet.

Stieg Larsson died nine years ago and his books about the enigmatic hacker Lisbeth Salander and journalist Mikael Blomqvist became a surprise posthumous hit. Nordstedts publishers have said the novels have sold more than 60 million copies since the original was published in Sweden in 2005.

"There is something distasteful about trying to make more money. I think that it is a little bit greedy. It is already a billion-dollar industry," she told Aftonbladet.

Gabrielsson, who was in a relationship with Larsson for more than 30 years before he died of a heart attack in 2004 at age 50, has been engaged in a long-running dispute with Larsson's family over the rights to the estate of the late author.

Since Larsson's death, rumours have persisted that other undiscovered works are hidden in his archive. In 2011, a confidante of Larsson's claimed that a fourth book was 70 percent complete, giving fans hope there would be another dose of Millennium.

The material has never surfaced, however, meaning that Lagercrantz's book will be a brand-new story. It's understood that the novel will begin with Larsson's death almost a decade ago.

"We think that these characters, Blomkvist and Salander, they are so viable. They deserve to live. It is out of respect of his authorship, so that his lifework will live on," said Lagercrantz.

The 51-year-old added that he promised to "carry on his legacy" in relation to the deceased original Millennium author.

In a press release issued by Nordstedts, the publishers praised Lagercrantz as a "skilled author" and the correct choice to succeed Larsson.

The fourth book in the Millennium series will be published in August 2015 to coincide with the tenth anniversary of the first novel 'Män som hatar kvinnor' (Men who hate women), which was later published in English as "The Girl with the Dragon Tattoo".