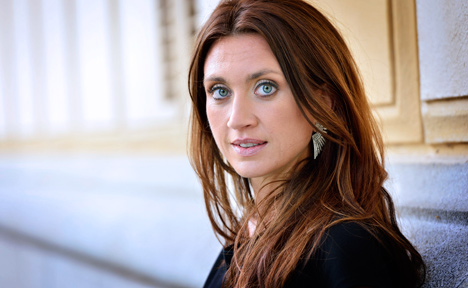 In order for a business owner to get money back on taxes for clothes purchases, the official verdict stated, it is not enough that a dress or a blouse makes it into one of the many public events or TV shows in which Läckberg participates.

"It should be fantasy clothes, pure stage clothes, clothes with the employer's name or logo, or other attributes that make them clearly distinguishable from ordinary garments," Sweden's Tax Agency (Skatteverket) said in an official statement about her outfits from Zara, Karen Millen, and Hope.

Läckberg will not, therefore, be allowed to deduct the taxes for her outfits – nor for the dry cleaning – which she said had cost her 71,586 kronor ($11,000) in total. The author also filed 24,990 kronor worth of styling, 33,040 in silver bracelets and necklaces, as well as a treadmill and other purchases of goods and services that were filed under health maintenance costs (friskvård).

A holiday to Italy, meanwhile, was filed as business because Läckberg stated she wrote the synopsis to one of her books while there. Her then husband was with her, and the duo said they were considering the possibility of writing a cook book together about Italian cuisine. The pair did include a list of the cook-book-related house calls on the trip. A visit to a spice company and a pasta maker, followed by six restaurants trips and three visits to local vineyards.

The research tempo, however, seemed not to have left much of an impression on Läckberg's husband, if his blog at the time was to be believed. The tax authorities quoted from the Cool Daddies (Coolapappor) blog verbatim in its ruling.

"Wow, you can really do so little in one whole day. Today we had breakfast at half past ten, then straight to the sun lounger surrounded by lemon trees. You can see for miles… Incredibly nice to just lean back and relax. No musts, no calls, no email, no work, no children nor other stuff to think about."

Further quotes from his blog continued in the same vein.

A 101,508 kronor family trip to Thailand was also included in Läckberg's tax return.

"I can mention that I've become HIGHLY motivated when it comes to my planned project here in Thailand to take the chance to lose those remaining two to three kilos that have stuck around since I was pregnant," Läckberg wrote on her blog.

The tax authorities have now asked her to pay an additional half million in taxes, following their extensive review.

While Läckberg is far from alone on the crowded crime novelist stage, she was the best paid of them all in 2011 when her company took home a 4.6 million kronor profit. A tally by Resumé media trade magazine put that figure in context. That year, colleague Mari Jungsted pocketed 3.6 million, genre veteran Henning Mankell netted 4.2 million and crime sage Leif G.W. Person took home half a million. Matriarch of the morbid Liza Marklund saw a profit of 800,000 kronor.