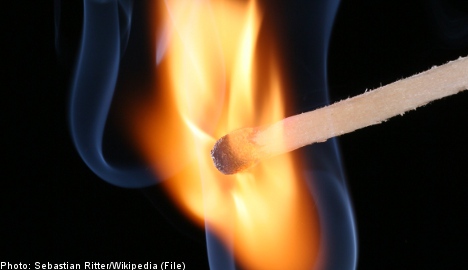 "Arson is a crime which is likely to affect confidence in the licenced (person). In Magnus Lundberg's case … the crime is to be considered serious," the Medical Responsibility Board (Hälso- och sjukvårdens ansvarsnämnd – HSAN)  wrote in its decision.
"Magnus Lundberg has acted in contravention of the requirements placed on a licenced professional within healthcare and his actions have been such that it may have repercussions on the confidence and trust in healthcare in general."
Lundberg, who is from Värmdö in Stockholm, was jailed for three years for arson by Svea Court of Appeal in a ruling in September. The court confirmed a conviction passed down by Attunda District Court in June 2012.
His future as a doctor had been under review by the Medical Responsibility Board since a report was filed in March 2013.
Lundberg, who has held a licence since 2002 and became a surgeon in 2008, burned down a luxury villa in Danderyd and was also were also convicted of fraud and receiving stolen goods.
The property in question was the subject of a purchase agreement signed by Lundberg and the former owner, the estate of Harry Schein. The court ruled however that the property was at the time of the fire to remain considered the Schein estate's property and thus the crime was classed as arson.
Lundberg had acquired the property for 19 million kronor ($2.89 million) from Schein's inheritor, Eva Paulsson Fischer. Lundberg had paid the 10-percent deposit and was due to pay the sum of the purchase in April 2012. The house however burned down in February 2012.
Lundberg denied the charges but the court ruled that the evidence was overwhelmingly in favour of a conviction.