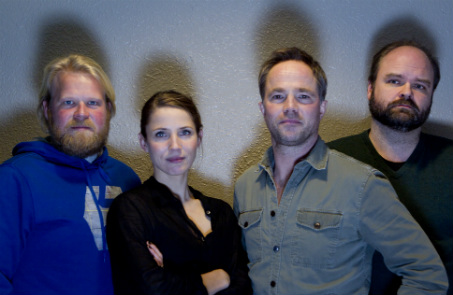 Anders Baasmo Christiansen (L). Can he save Sweden and Denmark? File: TT

Building a Bridge with Norway

Martin Rohde staring out of the back of a police car at his Swedish colleague Saga Norén… that scene hammered a final nail in the  coffin of their enticing professional relationship. The season two finale of The Bridge saw the lackadaisical and self-destructive Dane shipped off to prison after his Asperger-afflicted Malmö colleague ratted on him.

So where to now?

Apparently, to Norway. Well, in a sense. What we do know is that for season three the writers will introduce a Norwegian character.

As Norwegian television is experiencing a bit of a renaissance at the moment, with Hollywood chasing the rights to several hit shows, maybe we should not ask what Rohde and Norén what they can do for Norway, but what Norway can do for them?

We predict that rising star Anders Baasmo Christiansen, the drunken womanizer from TV show Dag and supporting actor from the film Kontiki, will come in and add some much-needed light-hearted balance to Norén's inability to smile and Rodhe's inability not to kill people. You know, when all else fails, bring in the Norwegian.

Frankly, we're not industry reporters, so let's call this less of a prediction than a clearly stated (genius) idea.