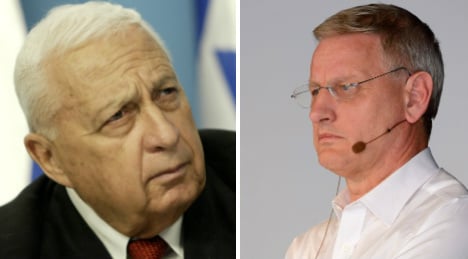 Photo: TT
Bildt wrote of "a major Israeli leader " and a "brilliant military commander", but also "a wise statesman who realized the importance of peace".
Green Party MP Mehmet Kaplan criticized Bildt, referring to Sharon's indirect involvement in the killing of Palestinians in the refugee camps of Sabra and Shatila in Lebanon in 1982.
"When this is so well known and such widely distributed knowledge, that our foreign minister makes this kind of statement on his official Twitter account, it is nothing but very, very tragic," Kaplan said.
Kaplan also claimed that Sharon cemented gaps between Israelis and Palestinians and argued that he was anything but a peace-seeking politician.
Kaplan argued that the comments by Bildt, whom he credited for normally holding balanced views, were very strange.
"This is very, very strange. Simply woeful that he is acting this way."
Hans Linde, Left Party foreign policy spokesperson, called the comments remarkable and "deeply provocative".
"He pays tribute to a person who is responsible for widespread massacres of Palestinians. A person who openly advocated the expulsion of the entire Palestinian people," said Linde, according to the Svenska Dagbladet  daily.
Linde maintained that Bildt's statement has hurt Sweden's credibility with the Palestinians and wondered if the other Alliance parties shared his view.
Ariel Sharon died on Saturday aged 85 after spending that past eight years in a coma. He served as Israel's prime minister from 2001-2006 during which time his tough uncompromising style earned him the nickname "the bulldozer".