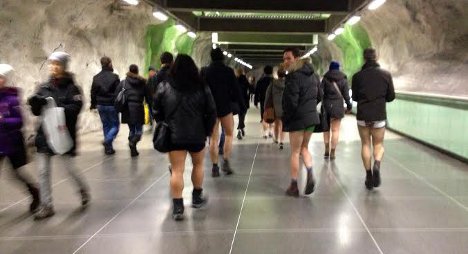 Photo: Betty Jarra
If you saw a few more knobbly knees than usual on the tube this weekend, fear not, you were probably caught up in the annual 'No Pants Subway Ride' where passengers ditch their trousers in the name of fun.
"It was really nice, we had about 65 people altogether and two more joined in when they saw what was happening," organizer Betty Jarra told The Local.
"They just took off their trousers and continued their journey — and a couple more joined us along the way."
IN PICTURES: See more bare legs from this year's event
The idea began with a comedic performance art group based in New York City called Improv Everywhere. The organizers created the event in 2002, but it really got legs five years later when it was imitated worldwide, hitting Stockholm for the first time in 2009.
See images from the 2013 No Pants Subway Ride in Stockholm
On Sunday, with temperatures in the capital dropping as low as -10C and with snow falling, the pantless commuters confused their fellow passengers, who Jarra said couldn't be sure if it was a protest.
"Some people wondered if we were protesting the weather," she added with a chuckle.
"But it's not some important political thing, we're just having fun and trying to get a smile out of other Stockholmers. When we finished up with a group photo, there were about 20 other people standing there taking pictures of us," she explained.
"A few of them even said they'd join us next year," she added.