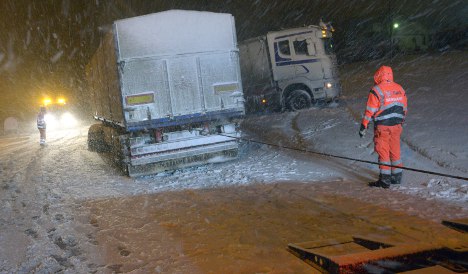 A truck being pulled out of the ditch in southern Sweden on Friday morning. Photo: Johan Nilsson/TT

"We've got warnings out for Blekinge, Skåne, Halland, and west Kronoberg overnight through Friday morning, as up to ten centimetres of new snow is expected," Sandra Anderssson, a meteorologist with Swedish weather agency SMHI told the TT news agency.

"Strong winds are causing a lot of drifting, and there's a risk for extra slick conditions when snow blows across the roads."

Eastern Svealand in central Sweden is expected to be hit by blowing snow during the day on Friday, as is the coast of Norrland in the northeast, said SMHI.

The blustery winter weather wreaked havoc on the morning commute in southern Sweden on Friday.

Shortly after 6am, a truck skidded out of control on the E65 motorway near Sveadala, blocking traffic in both directions when it finally came to a stop. At the Sturup roundabout on E65, also near Sveadala, a car drove into the median, but no one was injured, the Skåne County police reported.

With temperatures in southern Sweden hovering around freezing, road conditions are expected to remain treacherous. The snow also affected traffic on the Öresund Bridge connecting Sweden to Denmark, with officials warning of slippery roads and ordering speeds on the bridge reduced to no more than 50 km/h.

And on the E6 near Strömstad in western Sweden, two accidents occurred almost simultaneously, with one vehicle driving into a median, and another skidding off the road. One person was taken to hospital for treatment of neck injuries, according to police, while the driver of the second car escaped without injuries.

In addition, a car carrying a horse trailer drove off the E20 motorway near Götene and Skara on Friday morning. While police reported that no one in the car was injured, the condition of the two horses in the trailer remains unknown.