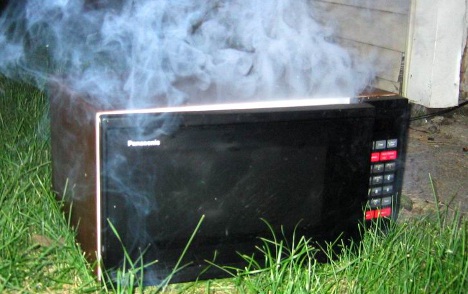 This microwave is not the microwave mentioned in the story. File photo: get directly down/Flickr

"It was supposed to be something artistic," one of the band members told police, according to the local Smålandsposten (SMP) newspaper.

The ill-fated video shoot took place in the cellar of a centre for adult education in Växjö often used by the teens for band practice. In the run up to the session, the two had found a recipe online detailing how one could create a moldable substance by mixing certain ingredients and then cooking them in a microwave. The teens wanted to use the substance to create a sculpture that would feature in their video.

But shortly after they started to warm up the mixture in the microwave, the 18-year-old's experiment went awry. Smoke and flames began emanating from the mug, and when one of them tried to throw the burning mug outside he dropped it on the rug.

Panicked at the smoke, flames, and fire alarm, the rockers fled the scene, leaving the burning mug inside.

While the fire died out before emergency crews arrived, the damage caused by the smoke was extensive. The investigators stated later that there had been a great risk that the fire could have spread.

The two band members have since been charged with reckless endangerment.