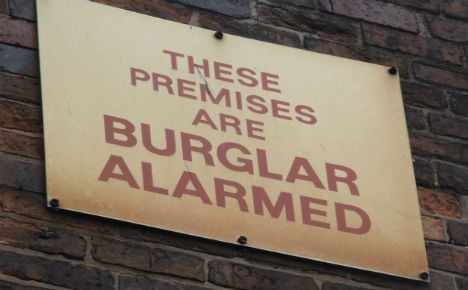 The alarm in the picture is not the alarm mentioned in the story. Photo: ellbrown/flickr

The intervention took place in Huskvarna, southern Sweden, in the early hours of Saturday morning when the man discovered that three men had made their way into the basement.

Their unscheduled arrival signalled the alarm to go off and got the tenant's attention. Undeterred, he made the quick decision to go to the basement and trap them before alerting the police.

"The plaintiff found the three people in the cellar and by chance somehow managed to lock them in," Bengt Netterström of the Jönköping police told local news outlet jnytt.se.

Police were quickly on the scene and apprehended the three men on suspicion of theft. They were subsequently taken in for questioning and two were arrested in connection with the incident.

While the police were quick to praise the man's initiative in taking the thieves on, they sounded a note of caution for anybody considering emulating him in the future.

"This was done well but one must always think of the consequences when you intervene in such a way. It is a question which needs careful weighing up on how much you dare to do," added Netterström.