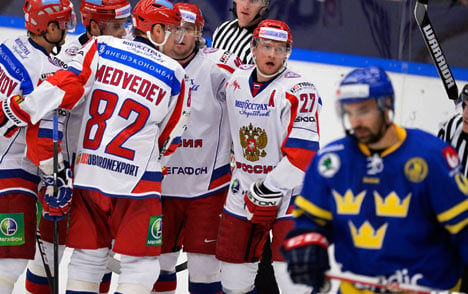 Canada is hoping for another golden goal, the mighty Swedes are brimming with medal potential, and host Russia seeks to make amends for their stunning collapse four years ago in Vancouver.

After crashing out of the Vancouver Olympics with an embarrassing 7-3 loss to Canada in the quarter-finals, Russia is determined to take care of some unfinished business on their home ice in Sochi.

Their much-vaunted team is looking to make amends for a sixth place finish in 2010 and become the first Russian team to win gold since the fall of the Soviet Union.

"It comes down to the same thing all the time," retired NHL superstar Wayne Gretzky told AFP.

"The team with the best goaltender. And if your best player is the best player on the ice and is on your best line, then your team is ultimately going to be the gold medal winner."

"I would have to say the Russians are favoured," said Switzerland defenceman Luca Sbisa.

"Russia is going to feel so much pressure to win because the Olympics are in Sochi. Canada, US and Sweden could also win gold but if I had to put money on it I would bet Russia."

The tournament begins February 12 with Sweden facing the Czechs and Switzerland battling Latvia.

These are the largest Winter Games in history with 98 medal events, including 12 new ones, as Russia welcomes the world to the balmy Black sea resort town.

The schedule concludes with its most raucous event, the men's hockey final on February 23 at the 12,000-seat Bolshoy Ice Dome.

Four-time world champion Russia have not claimed a hockey gold medal since the fall of the Soviet Union in 1991. That team won the Olympic title in 1992 in Albertville when they played as the Community of Independent States (CIS).

This time around their players are mix of NHLers and players competing in the Kontinental Hockey League.

Russia will be paced by Pavel Datsyuk, Alexander Ovechkin and Evgeni Malkin up front.

Defending champ Canada will be seeking to win their first Olympic gold outside of North America since 1952 in Oslo, Norway.

Canada's blueprint for success in Sochi is to go with big forwards who have plenty of scoring touch, backed by a mobile defence.

"We are going to be the type of team Canada has always been known for," said Doughty. "We will play with a lot of heart."

The Swedes, who won the Olympic title in 2006 in Italy, will also challenge Russia and Canada for gold in Sochi.

Their attack is led by the Sedin twins, Henrik and Daniel, Henrik Zetterberg, Alexander Steen and Daniel Alfredsson who will be making his fifth Olympic appearance.

"We have some younger guys and we have some players with international experience who have won before," Henrik Sedin said.

The Americans may not have a lot of stars up front but have the best goaltending which is necessary for any team who wants to make a run at a medal.

The 2010 silver medallists will likely go with Jonathan Quick as their No. 1 followed by Ryan Miller and Jimmy Howard.

Patrick Kane was their best forward in Vancouver as he anchors an explosive powerplay that also includes Dustin Brown and Zach Parise.

The next group of challengers includes Finland, the Czech Republic, Slovakia and Switzerland.

Finland's Teemu Selanne is back for his sixth Olympics as he becomes just the second player ever to take part in that many, joining fellow Finn Raimo Helminen.

The Czechs are banking on experience in Sochi as they send a team with an average age of 29.8 years. The team will be led by 41-year-old Jaromir Jagr who will be taking part in his fifth Olympics.

Jagr is the New Jersey Devils leading scorer this season with 15 goals and 39 points.