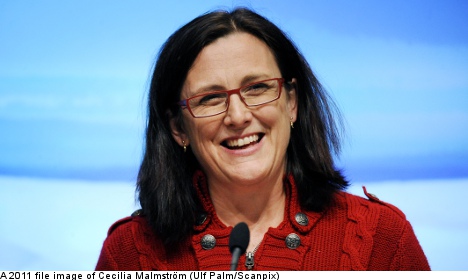 Corruption in the EU costs the European economy around €120 billion per year. To combat the issue, the European Commission launched its first ever anti-corruption report, which was published on Monday.
"Corruption undermines citizens' confidence in democratic institutions and the rule of law, it hurts the European economy and deprives States from much-needed tax revenue," said Cecilia Malmström, EU Commissioner for Justice and Home Affairs.
"Member States have done a lot in recent years to fight corruption, but today’s report shows that it is far from enough."
While the EU's executive body acknowledged that Sweden was among the least corrupt countries in the EU, it pointed to several areas of potential improvement.
SEE ALSO: The Local's profile of Cecilia Malmström
Specifically, Sweden could improve its transparency if it considered a general ban on anonymous political party donations. Sweden remains one of few EU countries without total party-funding transparency, and the government came under fire last month when it decided to keep the lid on private donations.
The report also hinted that Sweden could do more to combat the risk of corruption at the municipality and county level, which the commission said could be fixed by making authorities obliged to secure transparency in public contracts with private entrepreneurs.
RELATED: Swedish construction magnate convicted of bribery
The commission also pointed a finger at gaps in the framework for prosecuting Swedish corporations for bribery in foreign countries, which the commission suggested could be remedied by raising the fines and triggering liability even if the crime has been committed by intermediaries or third-party agents.
When it came to the Swedish public's interaction with bribery, a poll by the commission revealed that less than one percent of Swedes report having been asked or expected to pay a bribe in the last year, compared to around four percent of Europeans across the EU.
Meanwhile, 18 percent of Swedes say they know someone who has taken a bribe, compared to an EU average of 12 percent.
Forty percent of Swedish respondents believe that corruption is widespread in their country, compared to an EU average of 76 percent. Italy, meanwhile, saw 97 percent of respondents saying corruption is rife.
DON'T MISS: EU shaken by Swedish Match 'snus bribe' probe