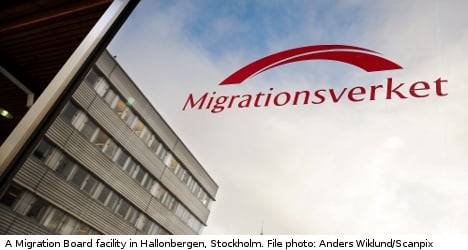 "We're just loyal civil servants who are trying to do what a unified Riksdag has decided," Migration Board head Anders Danielsson told the TT news agency.
In the last two years, 54 cases of vandalism directed at the agency's offices across the country have been reported to the police.
"I don't know of any other government authority that has suffered so many physical attacks," said Danielsson, who previously headed Swedish security police Säpo.
He reckons that most of the attacks are carried out by "autonomous" left-wing extremists.
The repeated and systematic violence has prompted Danielsson to pen a letter to the current Säpo chief and the head of the national police demanding better protection for Migration Board offices and employees.
The agencies tell the TT news agency they are taking the request seriously. While Säpo hasn't promised any new initiatives, the matter has been discussed by top managers with county and national police.