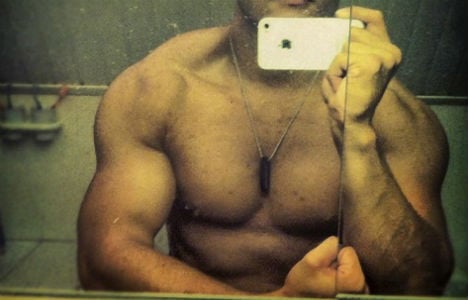 The Friskis & Svettis chain, which has branches all across Sweden, is imposing the ban in their Stockholm gyms. A selfie, a so-called self portrait photograph usually taken with a camera phone, entered the Swedish lexicon in 2013 and is now a social media phenomenon.

However, the gym chain has told members that they can no longer take pictures of themselves working up a sweat in a notice in their changing rooms.

"You are welcome to take pictures of yourself and your training. However, you cannot take pictures of other members without their permission. We advise a photo ban in all changing rooms," read the notice.

A spokesperson for the gym said that the selfie ban was not motivated by any specific incident but more to protect the modesty of others who could have their half naked torsos posted online, without their knowledge.

"This isn't really a new ban as in the past you weren't able to take pictures at all in the gym but we relaxed that a few years ago. Our members are welcome to take pictures of themselves and their friends in the gym working out but the locker room is off limits," Lotta Törnberg, head of communications for Friskis & Svettis told The Local.

Törnberg added that the decision was to protect their members, who she claimed were more "vulnerable" to being pictured naked or half-naked in the changing room in comparison to when they were training in the gym.

One gym member, Annelie Vest, said she had noticed the selfie gym trend in the past.

"I've noticed it and seen it on Instagram and Facebook. It is fairly common," she told Swedish Radio P3.

Vest added that it "wasn't OK" for locker room selfies but had no objections to pictures taken on the workout floor.

At present the selfie ban only applies to Friskis & Svettis gyms in the capital. Spokeswoman Törnberg told The Local that the responsibility to impose a similar ruling in their other gyms in Sweden was at the behest of the local municipalities, as the chain is a non commercial company without a corporate structure which issues nationwide protocol.

When asked if Swedes were more keen on "selfies" than other nationalities, Törnberg declined to go into details but said she had noticed a growing trend.

"There are a lot of people taking pictures, it's common but I wouldn't say that is a very big thing. Some people are into it but it wouldn't be for me," she laughed.