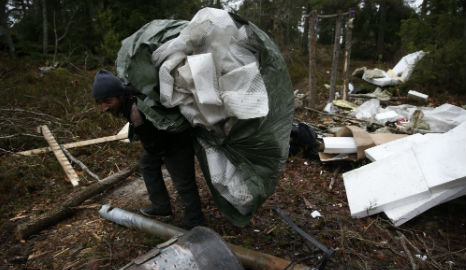 Migrants cleaning up in the shanty town in Högdalen on Saturday February 15th 2014. Photo: Fredrik Persson/TT

The accident took place in Alvesta when the bus veered off the national highway 27 shortly after midnight. One person, understood to be the bus driver, was seriously injured and spent the night in a local hospital although his injuries are not considered life threatening.

"It is very, very slippery on the roads in this area. It is completely icy which may have been a cause of the accident," local policeman Percy Nilsson told the Expressen newspaper.

The other passengers spent the night in a hotel where a spokesperson said they were in shock following the crash.

Earlier in the day the bus had set off from Stockholm en route for the Romanian capital. The passengers had been living in a shanty town in Högdalen and were set to be evicted on Monday by the Swedish Enforcement Authority (Kronofogden).

Following the eviction notice social services offered to provide a free bus ticket to the migrants back to Romania. Newspaper Expressen reported that 90 EU migrants had accepted the complimentary bus ticket home.

After the crash the passengers were picked up by a second bus and driven to Växjö to a local hotel. A police spokesperson said that the Romanian migrants will continue their trip on Sunday.

"The travel company will organise a new bus for them on Sunday," added policeman Percy Nilsson.

Earlier on Saturday a clean up operation in Högdalen had got underway.