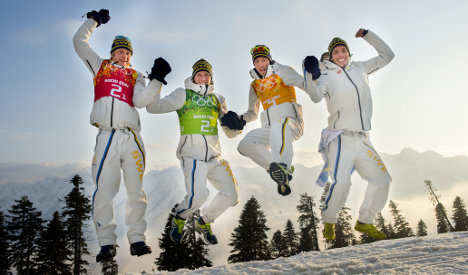 The Swedes jump for joy after winning gold in the Men's Relay 4x10km. Photo: Maja Suslin/TT
While not a threat to international peace — yet — the enmity between Nordic neighbours Sweden and Norway on the supposedly placid cross country skiing tracks can barely be matched for bad blood.
After striking three early golds in the cross country events at Sochi 2014, the men's and women's relays were an unmitigated disaster for Norway, coming fourth and fifth in races both won by… Sweden.
Norway's fearsome star cross country skier Petter Northug — a bete noire for Swedes who does not mince his words — cut a sad and angry figure as he crossed the line in the men's race.
"Ridiculed by the Swedes, again!" lamented the Norwegian daily Verdens Gang after the men's race Sunday.
It was the first time the all-conquering Norwegian women's team had even lost a relay race since 2009 while the men were outclassed on every leg by Sweden, Russia and France.
The reason for the disaster was less do to with the athletes themselves than the preparation and waxing of skis to deal with the Sochi snow — soft and slushy after hot weather.
The world's top cross country ski teams employ a battalion of specialists to prepare athletes' skis for every race, putting the right wax on the base of the ski to ensure the maximum glide on different types of snow.
But this time, Norway's usually infallible waxing team appears to have got things wrong. And to the delight of Swedes, badly wrong, while the Swedish skis have moved like lightning.
"Zlatan would have won on those (Sweden's) skis," Northug was quoted as saying afterwards, referring to the Swedish football star Zlatan Ibrahimovic whose skiing talents he presumably does not rate too highly.
"When the skis are that bad, it's just awful. It's not fun to race when it's like this," fumed Norway relay team member Chris Andre Jespersen.
Rubbing salt into the Norwegian wounds, Swedish gold medal winner Daniel Richardsson baited his rivals by suggesting it was their form, rather than their skis, that was to blame.
"Those guys I raced with today have the same (skis) as me. Not bad, not worse either. We have good skis in Sweden. I think Norway has as well."
Jespersen spat back: "If he'd raced with my skis I don't think he would have done so well."
Sweden's cross country skiing coach, Rikard Grip, acknowledged that the team's skis had been "fantastic" and admitted there had been a concerted effort to work out how to beat the Norwegians.
Meanwhile Norwegian media pointed out that Norway was still far ahead of Sweden in the overall medals table with five golds at Sochi compared to Sweden's two, both from the relays.
"Okay, so we were crushed by the Swedes in the relays, we can't wax skis and there are crises in the Norwegian cross country," said Verdens Gang. "But we are still big brother. At least in the medals table."
As in all good Nordic dramas of hatred and passion, a sub plot has also developed in the shape of a feud between Norway and the Russian team.
This has been rumbling all season since Northug — him again — vowed to "destroy" one of Russia's top skiers Maxim Vylegzhanin in Sochi.
The tensions reached a peak last week in the first men's cross country race of the Games when Norway's Martin Johnsrud Sundby took bronze in the skiathlon by a whisker from Vylegzhanin after skiing across his path in the final strides.
Russia protested, Sundby was warned but kept his position and medal. But the Russian neither forgave nor forgot and Russia's silver-medal winning relay hero Alexander Legkov said he was glad Norway had come out of the race empty handed.
"It's good to know that the French won bronze. I didn't want the Norwegians to win because of what they did to Maxim," he said.
"This is revenge – tit for tat."