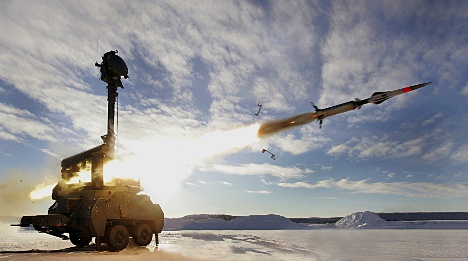 Fifty-four percent of exports went to to EU member states or to established trade partners such as Canada, South Africa, and the US, the agency noted. A score of other partners, including India and Saudi Arabai, made up the remainder of 46 percent. Thailand's purchase of the Swedish fighter jet JAs 39 Gripen was also a key deal last year.

Marine weapons system to the US and airborne radar to Saudi Arabia also made the list.

Overall, Swedish exports to the Middle East were limited apart from significant deals with the Saudi and the Emiratis. Since 2012, Swedish companies must apply for a permit to export enforced armour plates, which was sent to Egypt and Israeli. There were also some small-scale follow-up orders shipped to Bahrain, Kuwait, and Oman. Some minor equipment upgrades were sent to Tunisia and Algeria.