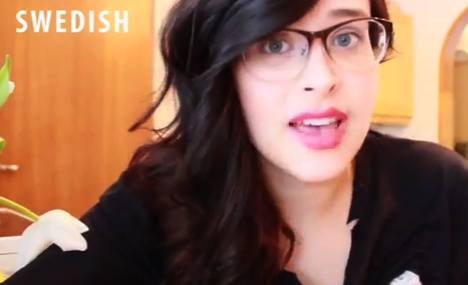 A rival to the Swedish Chef in the Muppets? Photo: Screengrab from Smoukahontas/YouTube

The YouTube clips revealed little about her nationality. So there are tulips on the table and the kitchen cupboards are made of birch… which twenty years ago would have narrowed it down somewhat to the Nordic countries, but since Ikea achieved worldwide flatpack domination, this kitchen could be anywhere really.

Impressive also applies to the number of times her video has been viewed on YouTube. More than 2.5 million times in just two days, last time we checked. And she's not even speaking real words.

A few clicks later, it turns out Smoukahontas is a 19-year-old Finn, with an Instagram account sporting a generous array of selfies.

In the video, she gallops through languages, throwing in an "Innit?" into the British English rendition that otherwise is just meaningless gobbledygook. The American English stands out in pitch-perfect contrast, with a whiney "Seriously?" thrown in for good measure. Hindi, French, Estonian, and Portuguese also gets the Smoukahontas treatment.

The Swedish rings so true it's almost uncanny. What do you think? Is this the best fake Swedish since the Swedish Chef on the Muppets?