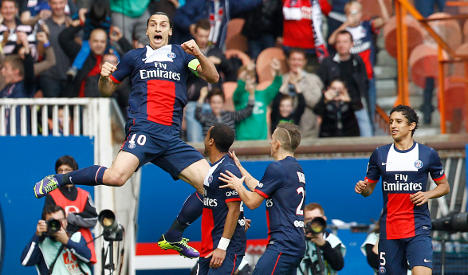 The Malmö native, who holds a black belt in taekwondo, showed off his martial arts skills to superb effect by leaping into the air to execute a back-flick to tee up team-mate Ezequiel Lavezzi who scored.

Ibrahimovic, nicknamed Ibracadabra for his dramatic antics on the pitch, had earlier opened the scoring for PSG in their 3-0 away win over Bastia. He followed his goal and kung-fu assist by setting up Lavezzi for the killer third goal.

PSG's win stretches their advantage at the top of Ligue 1 to eight points over rivals Monaco. Ibrahimovic is also top of the scoring charts with 23 goals in the French top division so far.

"Our aim is to win matches, if that allows us to stretch out the gap we'd be delighted," PSG boss Laurent Blanc told AFP.

The Parisian outfit will next be in action in midweek in the Champions League against Bayer Leverkusen and already have one foot in the quarter-finals after beating the German side 4-0 in the first leg.