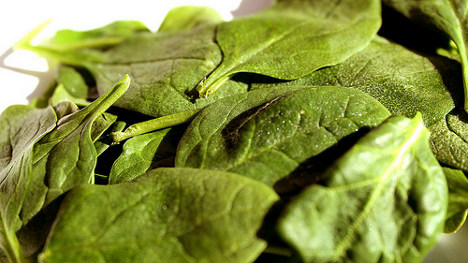 Could spinach hold the key to stopping hunger pangs? Photo: Daniella Segura/Flickr
Charlotte Erlanson-Albertsson, a professor of appetite regulation at Lund University, found the compound, known as thylakoid, while looking for ways to slow digestion and alleviate hunger pangs.
The compound functions differently to processed foods, which tend to be digested only in the upper intestine.
This prevents key hormones that make us feel full from being released to the brain, according to a statement from the university.
"I like to say our intestines are unemployed," Erlanson-Albertsson said.
A test group of 15 people who took the compound every morning reported that it had become easier to resist the temptation to eat between meals.
Erlanson-Albertsson discovered the compound after speaking to her husband, a scientist researching photosynthesis.
He steered her in the direction of thylakoids, a compound in green leaves believed to slow down fat digestion, meaning the whole intestine has time to get involved, the university said.
But eating spinach itself is not enough. It has to be crushed, filtrated and passed through a centrifuge, freeing the thylakoids from the plant's cells.
"Our bodies can't break it down from fresh spinach directly," the university said.