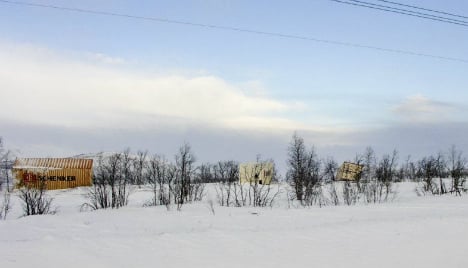 Containers dotting the snowy landscape following a derailment in Sweden's far north. Photo: Trafikverket
Swedish weather agency SMHI had warned of storm force winds and the forecast proved its veracity on Saturday morning.
The speed limit on the Öresund bridge was cut and wind-sensitive vehicles were instructed to delay their journeys across the sound as winds tested the safety limit of 25 metres/second.
Rail services across Skåne had been cancelled because of the weather warning with replacement buses deployed. The affected services include routes between Malmö and Simrishamn, Helsingborg and Teckomatorp and between Hässleholm and Helsingborg.
Services on the west coast line between Helsingborg and Ängelholm were also cancelled and replaced with buses.
After a burst of spring highs, the weather turned cold across the country on Friday with new snowfalls and high winds spreading down from the north.
"There's a really deep low pressure located near Lofoten. This means that it gets really windy, especially in the mountains," said Linnea Rehn, meteorologist at SMHI.
Mountain roads in Norrbotten, including the crossing to Norway, remained closed on Saturday because of the harsh weather and very strong winds. The closures also affected road 95 between Arjeplog and Bodo, and the E10 between Kiruna and Narvik.
Rail services were also suspended following the derailment of a goods train on the line between Kiruna and Narvik. Ten containers loaded with Norwegian salmon were left scattered along the tracks, according to the Swedish Transport Administration (Trafikverket).
Both the railway and electricity lines were damaged in the derailment. Work to repair the route and salvage the containers is expected to be finished on Thursday with disruptions ensuing as a result.