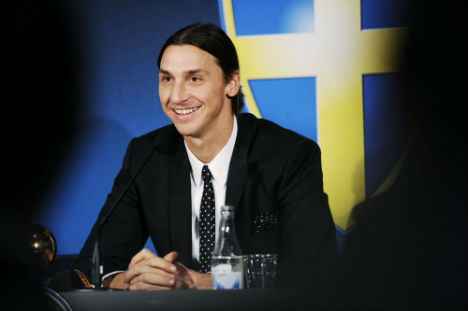 Zlatan is laughing all the way to the bank after making the top five of football's rich list. Photo: Erik Mårtensson/TT

The striker, who currently plays for Paris Saint-Germain in France, has vaulted up three places from last year. Ibrahimovic was placed eighth in 2013 after earning €17.5 million and has moved up considerably from his position of 11th in 2012 when he pocketed €14m.

Since signing for big-spending PSG in the summer of 2012, Zlatan's earning power has improved considerably. Last September he signed a new contract which upped his salary from €13.8m to €15m per year. Combined with personal endorsements with brands such as Volvo and Microsoft's Xbox the respected France Football magazine have estimated Ibrahimovic's earnings to be €23.5m, or 208 million Swedish kronor.

The forward has caused a stir in the past with his comments about money. When he joined PSG in 2012 he said; "We are looking for an apartment (in Paris). If we don't find anything then I'll probably just buy the hotel."

When quizzed that he had bought a new Porsche the Malmö native quipped; "Absolutely not. I have ordered a plane. It is much faster."

In 2013 he put his Malmö mansion on the market after deciding he didn't need it any longer. He had previously bought it for 30 million kronor ($4.73 million), an amount high enough to have the previous owners "leaving the house running" he wrote in his autobiography.

Despite his new lofty financial status he is still some way behind former Barcelona team-mate Lionel Messi. The Argentinian is the world's best played footballer with earnings of €41m, closely followed by Real Madrid ace Cristiano Ronaldo on €39.5m.

A new set of stamps featuring Ibrahimovic will be issued on March 27th. He was on the mark again over the weekend for his club when he netted a brace bringing his tally to 40 goals already this season.