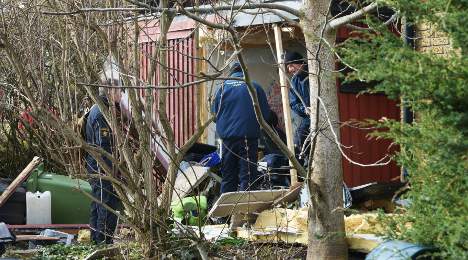 The destroyed store room. Photo: TT
The blast went off in Skurup, southern Sweden, but police have released few details about the incident.
"It's unclear exactly what has happened, but it's a storage room that exploded," Jimmy Modin of the Skåne police told the TT news agency.
Two people sustained minor injuries from the blast and were taken to hospital, reported the Ystads Allehanda newspaper.
Police arrested two men on suspicion of aggravated weapon crimes and public devastation (allmänfarlig ödeläggelse).
When police raided one of the men's homes, they discovered large quantities of stolen goods. They arrested a woman in her sixties on suspicion of theft and receiving stolen goods.
The three people are related, but do not all live together. Police have launched an investigation.