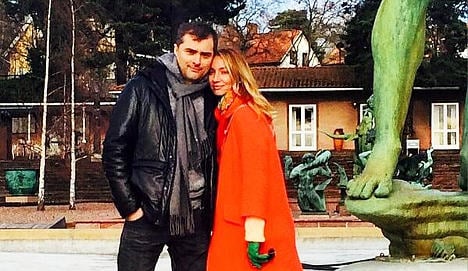 Vladislav Surkov poses for a picture with his wife Natalia Dubovitskaya at Millesgården sculpture garden. Photo: Dubovitskaya's Instagram account
Vladislav Surkov was on holiday in Sweden as recently as Sunday. The trip was recorded on his wife's Instagram account, which shows the pair at Stockholm's popular tourist attractions including Millesgården sculpture garden.
The EU slapped a travel ban on the Russian on Friday March 21st, meaning he is not allowed to travel anywhere within the European Union.
"I can confirm that he has been in Sweden and that he came in before the sanctions were announced. Exactly when we do not know," Stockholm border police spokesman Kent Söderlund told The Local.
"I know that he left on March 23rd. He left from Arlanda airport. He passed our border but I don't know his destination. He must have left the EU, otherwise the travel ban would have shown up in border checks."
The holiday pictures on Instagram were uploaded between March 20th and 23rd.
Isabelle Sundström, a spokeswoman at the Foreign Ministry, said the ministry was unsure why the Russian was in Stockholm, and that further details remain unclear.
"We have no information to indicate that he entered the country after the sanctions took effect," she told The Local. "We have not had any contact with the Russian embassy."
The chief of Stockholm's border police, Peter Nilsson, earlier said he had no record of Surkov entering Sweden via Stockholm.
And if Surkov left after the ban was announced, "then he was going the right way," he told The Local.
Surkov made headlines worldwide last week for his comments after the White House also placed sanctions on him and six other Russian officials.
He told a Russian newspaper that it was a "big honour" to be on the US list.
"The only things that interest me in the US are Tupac Shakur, Allen Ginsberg, and Jackson Pollock. I don’t need a visa to access their work. I lose nothing," he quipped.
Surkov is credited with having created the vast pro-Putin Nashi youth movement and devising the political system known as sovereign democracy that has allowed Vladimir Putin to flourish. A long-serving influential aide to the President, he served as deputy prime minister from December 2011 to May 2013.
Surkov, nicknamed the "grey cardinal", is thought to have fallen out of favour with Putin before the Ukraine crisis, but reports suggest he was then brought back into the inner circle and served as a central figure in plotting the annexation of Crimea.
Oliver Gee/Paul O'Mahony