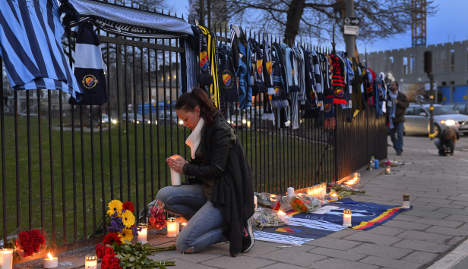 A fellow supporter mourns at Stockholm's Stadion. Photo: Anders Wiklund/TT
The assault took place in Helsingborg, southern Sweden, on Sunday afternoon before a match between Stockholm's Djurgården and Helsingborg.
Witnesses have said that the attacker was a man in his mid-forties, and that the assault was unprovoked.
"We really want the public to contact the police with any information they have," Martin Carlsson of the Skåne police told the TT news agency.
"If there are any witnesses we would be thankful to hear from them. We're after any information that can add some clarity to this."
One witness told the Aftonbladet newspaper that there was more than one person who attacked the man.
"There were three people who came running. One of them smashed a glass bottle on the back of the man's head. He fell, and they started hitting and kicking him," the woman said.
The head of the Djurgården football club, Henrik Berggren, said that the victim was a typical supporter who was liked and respected by his peers. As condolences have flooded in for the supporter, Berggren said the club is now making preparations to honour the man's death.