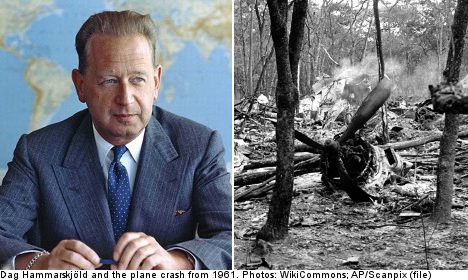 The declassified document, witnessed by the UK Guardian daily, is a cable sent by the US ambassador to Congo to Washington in which he claimed that the aircraft could have been downed by a Belgian mercenary pilot.

The document was released recently by a panel of senior lawyers who called on the UN in 2013 to reopen an investigation into the crash.

According to a report in the Guardian on Friday the document reveals that US ambassador Ed Gullion, just hours after the plane crash, sent a classified cable to Washington calling for pressure to be brought on Belgium to ground a Belgian mercenary pilot.

Hammarskjöld died during the night of September 17th, 1961 in a plane crash in what is now Zambia, where he was headed to mediate in the ongoing conflict in neighbouring The Congo in his role as then UN Secretary General.

The diplomat's death has been the subject of numerous rumours and conspiracy theories over the past five decades centred around whether the crash was an accident, or if Hammarskjöld was killed.

Last year, four senior lawyers led a new investigation into Hammarskjöld's death. The commission published its findings in September 2013 and urged the UN to launch its own probe into the crash.

The report indicated that the US National Security Agency (NSA) likely has key evidence about the mysterious death Secretary General Ban Ki-Moon decided that it should be presented to the United Nations General Assembly.