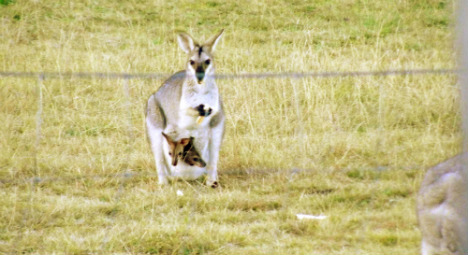 A wallaby in its natural habitat of Australia. Photo: TT
Nahla the wallaby disappeared from her family in the rural society of Dänningelanda in southern Sweden on Wednesday.
The animal, which is more at home in Australia and New Guinea than the Swedish countryside, returned home over the weekend safe and well, but reportedly tired and hungry, according to Sveriges Radio.
Nahla went on walkabout after being frightened by a dog and her disappearance caused potential problems for her owners as it initially remained unclear whether Swedish law permits the species to be kept as household pets.
But after a closer reading of the rules it seems that Nahla can stay put as the local authority has concluded that it is acceptable as long as the rules are followed.
According to the Sveriges Radio report the wallaby was not the only exotic animal on the loose in the vicinity of Växjö this week. Apparently a lemur – a small ape which originates from Madagascar – has also recently been reported missing.
The ape's owner distributed a notice to residents of Dänningelanda a few weeks ago urging residents to keep a look out for the family's furry friend which was described as "semi-tame with a penchant for raisins".
According to Michael Diemer at the Sweden's Board of Agriculture (Jordbruksverket), the ape is most definitely not permitted according to Swedish domestic animals legislation, Sveriges Radio reported.
There is no suggestion that the absconding ape and the wandering wallaby are in anyway cooperating with each other.