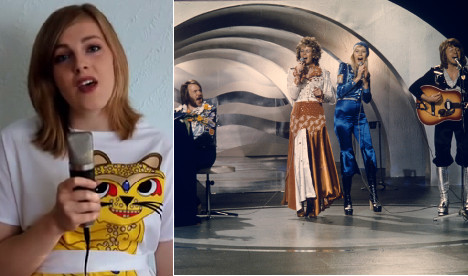 Grace McCallum and Abba. Photos: YouTube (screengrab)/TT
Australia has an unusually strong relationship with Swedish megapopsters Abba.
Abba – The Movie was filmed while the band was on tour there in 1977. Iconic Aussie films like Muriel's Wedding and Priscilla Queen of the Desert feature the band's songs prominently. And now, an Australian woman is the only foreigner on the Abba choir.
"I'm a massive Abba fan, so it feels so great to be the one person connecting Australia to Abba in 21st century," 21-year-old Grace McCallum told The Local from a hotel in London.
"Loads of Abba fans back in Australia have emailed me to say how proud they are."
The choir was formed to mark the 40th anniversary of Abba's debut at Eurovision, where they performed Waterloo (video below). To coincide with the anniversary, the band released a new book at launch parties in both London and Stockholm.
McCallum and 49 other singers sang at the Tate Modern art museum on Monday after a gig at Stockholm's Abba Museum during the weekend.
The trip has been an eye-opener for the young Tasmanian student, who entered the competition for the only international spot on the choir by recording the chorus of Thank You For The Music and posting it on YouTube (below).
"It's been a surreal experience. Finding out I had won the place was the most amazing moment of my entire life. Since then, on the trip, I've had moments that eclipse even that," she added.
Indeed, a surprise meet with Benny Andersson was one of them. And he knew who she was.
"The day before we performed at the Abba musem I got to meet Benny by mistake. When I went to my hotel room he was standing at the elevator. He knew who I was as the only person who wasn't Swedish. He said 'Oh, you're the one, I've heard about you'. It was such a great moment," she beamed.
In London, she even had the fortune of meeting Frida and Björn.
"Frida gave me the longest hug. She said she was really moved by a letter I'd sent her a few weeks ago, which included a wate rcolour painting I'd done of her famous cat costume," she said.
"It was the most incredible moment of the entire trip."
With the choir's duty done for now, McCallum is heading back to Australia to finish her journalism studies, but hopes to return to Sweden again one day.
For now though, she points to a quote by Toni Collette in Muriel's Wedding to sum up her trip.
"Life is as good as an Abba song. It's as good as Dancing Queen," she told The Local with a chuckle. "I love that quote and it's never felt more relevant."
McCallum's audition:
Abba's debut at Eurovision with Waterloo: