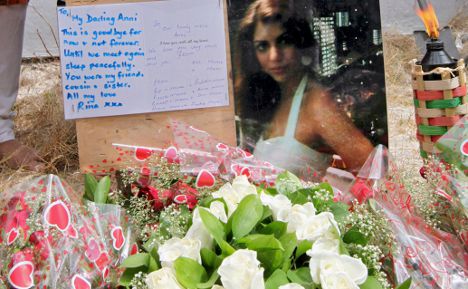 Photo: TT
After losing a three-year extradition fight, Dewani, 34, arrived in South Africa early on Tuesday morning and was promptly whisked to the Western Cape high court.
Dewani sat expressionless as Judge John Hlophe ruled he would be remanded in custody at the nearby Valkenberg mental institution.
He said only "yes" when asked by the judge if he could hear what was being said.
"The state and defence have agreed that the matter will be postponed until 12 May and that (the) accused be remanded in custody" at the psychiatric unit, said state prosecutor Rodney de Kok.
Dewani was formally charged with murder, conspiracy to commit murder and defeating the ends of justice by the country's elite crime-fighting unit, the Hawks.
"Dewani has been accused of orchestrating the murder of his wife. He
allegedly ordered local men to carry out a hit on his wife and make it look like a fatal carjacking incident," the Hawks said in a statement.
"A substantial amount of money was paid for the hit."
Dewani denies ordering the killing of his 28-year-old Swedish bride Anni in Cape Town in November 2010.
He claims the couple were kidnapped at gunpoint during their honeymoon as they drove through the Gugulethu township in a taxi.
Dewani escaped unharmed, but his wife's body was found in the abandoned car the next day. She had been shot dead.
Prosecutors allege Dewani hired South African Xolile Mngeni to kill Anni.
Mngeni was jailed for life for the murder in December 2012.
Two other men also jailed over the killing allege that Dewani ordered the hit.
'Looking for answers'
Vinod Hindocha, father of the slain bride, told Britain's ITV News of his
relief at the decision to send Dewani to face trial in South Africa.
"Now we hope we get the answers we've been looking for the past three and a half years," he said, adding that the South African justice system is "very fair".
"I am positive, confident that he will get a fair trial," he said.
Dewani had fought his extradition, claiming he has mental health problems, including depression and post-traumatic stress.
But a British court ruled last month that after numerous legal challenges, he could be sent to South Africa.
Extradition officers from Britain's Metropolitan Police Service took Dewani from Fromeside Hospital in southwest England, where he has been receiving treatment for reported mental health problems, to nearby Bristol Airport late on Monday.
Dewani landed at Cape Town International Airport Tuesday on a private aircraft, flanked by a medical doctor, a nurse and members of the South African police force and Interpol.
Justice department spokesman Mthunzi Mhaga said the decision to charter a private plane was taken as a result of Dewani's history of mental problems.
The authorities feared using a commercial flight may have compromised their case ahead of a full medical examination.
"We took into account the fact that there was undisputed evidence during the extradition hearing that he had displayed suicidal tendencies and the South African government did not want to take chances," said Mhaga.
"There was a need to ensure that Dewani and the whole team are secure and that would have been difficult on a commercial flight with many passengers, which had the potential to compromise their security as his identity is now well known."
Dewani will still have to undergo tests to see if he is fit to stand trial.
If he is not found fit to face court within 18 months, he will be returned to Britain under the terms of his extradition.
In a statement his family said Dewani remained determined to clear his name.
"We look forward to his health improving, his name being cleared, and there being an end to this legal trauma for all involved," said the statement.
"Shrien's family and his legal team have every confidence in the South African judicial system."