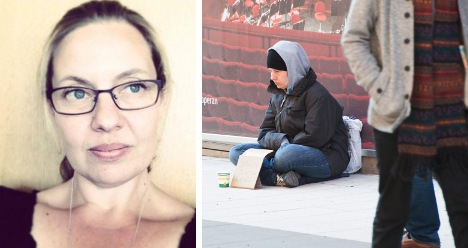 Nikoletta Jozsa was elected to municipal office in Järfälla, northern Stocholm, three years ago. Originally a social worker who volunteers in a soup kitchen in her spare time, Jozsa says she felt she had to experience what beggars in Sweden go through.

Pulling on a pair of jeans and a warm jacket, she headed to Drottninggatan, a main shopping fare in central Stockholm that is usually thronged with people.

"I was terrified. My first thought was, ''I'm going back home'," Jozsa tells The Local. "I stood there for so long hesitating before I sat down, until I felt I just had to do it. And when I was finally sitting, the first thing I felt was shame."

Unable to even look up, she sat pondering how she had made herself so vulnerable to other people. In the end, she looked up, but was saddened even more when she did.

"What upset me the most is that I no longer existed. People would either almost walk into me, because they hadn't seen me, or they'd make big detours to avoid me," she explains. "I'm not sure which was worse…."

"And some people would pull their kids away from me," says Jozsa, whose voice breaks down in a sob. "And that was the thing, if there was someone who saw me, who looked at me and looked in my eyes, it was always the children."

She was unprepared for the pain. After thirty minutes, her hips ached, her back became stiff, her legs sore. She didn't know how to adjust her body to lessen the pain .

"I can only imagine how people who sleep rough, on the streets and in public toilets, feel," she says. "It was a useful experience to feel the actual physical pain."

She sat for five hours. While most adults ignored her, a few would stand back and take her picture.

"Like I was an object. They'd meet my gaze but not react, then walk off," Jozsa says.

"It's very easy, as a politician, to say that the situation for beggars is horrible and a violation, but I had to try to understand. I will never truly understand – because I realized things would have to go so very wrong in my life before I sit down to beg on the street – but at least I have an inkling."

Jozsa says she agrees fully with European Affairs Minister Birgitta Ohlsson's recent outrage that Romania, from where many beggars in Sweden now travel, has not put to use the EU funds to combat poverty that are available to them.

The local politician also underscores that while she was begging in a country where she knew the language and the culture, the Romanians who travel here do so with no knowledge of what it will be like.

"I cannot imagine that anyone would do that voluntarily," she says of some critics' argument that Romanian Roma in particular have made begging into a profession.

Jozsa herself grew up in Hungary, which she says has some similarities to Romania. She blames ignorance for the failure to help the poorest communities in eastern Europe.

"I feel these countries need knowledge  to tackle the question 'How can we make sure these people fare well?'," she says. "People should not have to leave their country because they can't live there."

She says she hopes Sweden and other EU nations will now put further pressure on Romania to access EU funds.