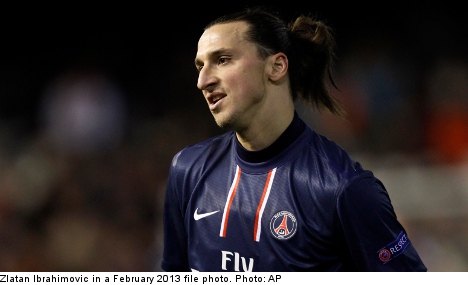 The Ligue 1 leaders have not, however, confirmed how long they expect their leading scorer to be on the sidelines with the injury suffered to his right thigh in the first leg of their Champions League quarter-final against Chelsea last week.

PSG president Nasser Al-Khelaifi told RMC radio that he expected the Swede to be on the sidelines for at least four weeks, meaning that he would not return until the start of May at the earliest.

The club's coach Laurent Blanc has insisted that Ibrahimovic, who has scored a club record tally of 40 goals in all competitions this season, will play again before the end of the campaign.

He missed the second leg against Chelsea on Tuesday, which PSG lost 2-0 to exit the Champions League on away goals, and he will miss the League Cup final against Lyon on April 19.

PSG are 13 points clear at the top of Ligue 1 with six games remaining and could seal their second successive Ligue 1 title this weekend with a win at Lyon on Sunday if second-placed Monaco lose at Rennes on Saturday.