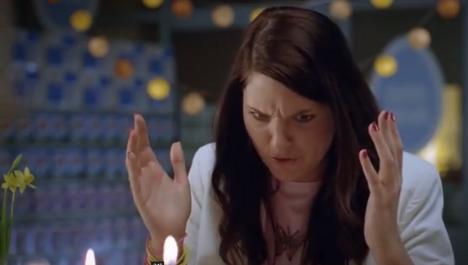 Grossed out Ica woman at Easter dinner. Screengrab from Ica

The Ica adverts, which have chronicled a team of supermarket staff for years, took a stab at Sweden's upcoming Easter holidays this week. But the advert for a joint of lamb, cut-price eggs, and discount Swedish cheese has done nothing but ruin the appetite of some of Ica's potential customers.

"It just doesn't feel right that someone is making jokes about something that's holy to me," Sara Beardsall in Helsingborg told Sveriges Radio (SR).

The clip in question (below) shows the four staff members seated around a table for Easter dinner. As store manager Stig breaks a baguette in two, a male colleague references the breaking of the bed in the bible.

But when he also points out that it represents Christ's body, a female colleague interjects to say that talk about bodies around the dinner table grosses her out. She even shudders. And shouldn't her male colleagues wax their backs, while on the topic of bodies?

"To have them talking about it like something disgusting – waxing backs, that the body is wrong, etc – it doesn't only feel strange to me, it's actually insulting," Beardsall explained about her reaction to the televised commercial.

"Listen, so it's OK to make jokes about Christianity to a certain extent, but communion is such a central part of Christianity and you've crossed the line if you joke about it," Ekelund said.

The advertising watchdog Reklamombudsnämnden (RO) has received one official complaint and will look into the matter. While RO does not issue financial penalties, it publishes its verdicts online.

"To be mentioned in the media can feel like enough of a punishment," spokeswoman Elisabeth Trotzig told the Christian newspaper Dagen.

A local Ica store manager in Lagan also told Dagen that a few of his customers had already complained, although he said people needed a sense of humour.

Ica has now decided to stop broadcasting the commercial, effective within 24 hours.

"We do want to continue making films that bring up current events… but maybe we won't make more films about religion in the middle of a religious holiday," spokesman Ola Fernvall told SR.

Ica has landed itself in hot water before. Last year, several commenters said an advert portraying Chinese people as dog-eaters was offensive.