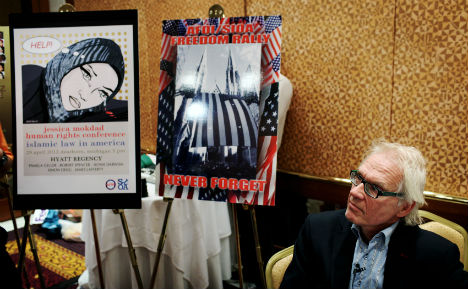 Mohammad Hassan Khalid is the youngest person ever to be convicted of terror offences in the US. He was just 15 when the plan to kill Vilks was hatched in tandem with Colleen LaRose, known as Jihad Jane, and has spent the last three years in custody.

Khalid previously pleaded guilty to a single count of conspiracy for his role in the plot, which was rumbled by police five years ago.

LaRose, Khalid and several other extremists had hatched a plan to kill Lars Vilks in 2009. The Swedish artist was the subject of numerous death threats after portraying the Prophet Mohammed on the head of a dog on a cartoon.

Both LaRose and Khalid discussed the murder plot online before 'Jihad Jane' was arrested. In January 2014 the America woman, 50, was sentenced to 10 years in prison for planning to kill Vilks and for hatching other deadly attacks in Europe and South Asia.

A spokesperson for Khalid's defence team said that their client was a "vulnerable" teen when he carried out the offences. The prosecution acknowledged that the 20-year-old, a native of Pakistan residing in Maryland, had co-operated without any problems with the investigation.

“The FBI used a kid who was extraordinarily vulnerable, and that wasn’t right. He was just a kid. They didn’t ruin his life, but they helped him do that to himself,” Jeffrey Lindy, Khalid’s lead attorney, told Britian's The Guardian newspaper.

In court it was revealed that Khalid had promoted jihadist activities online by translating violent videos into English. Before his link with LaRose was unearthed he had been tipped for a bright future after winning a full scholarship to the prestigious Johns Hopkins University.

Khalid is the third person in the Vilks plot to be sentenced. Jamie Paulin-Ramirez was jailed for eight years in January for her part, where she pleaded guilty to giving material support to a terrorist group.

As Khalid never became a naturalized US citizen he will likely be deported back to Pakistan once he completes his sentence.

Lars Vilks said prior to LaRose's prosecution that they "might as well set her loose." The artist has yet to comment publicly on Khalid's sentence. He made the headlines in February after bomb technicians were sent to his home but which turned out to be a false alarm.