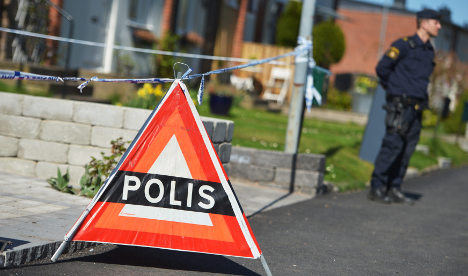 Photo: Johan Nilsson/TT
"We are taking this seriously, we are trying to ensure safety for anyone who feels they need the support and help of the police," Anders Selvik, who is heading the police investigation, told the Expressen newspaper.
The comments came after a violent brawl on Monday night in Norrköping, eastern Sweden. Up to forty people were involved, witnesses said, and two brothers were shot dead.
Police labelled the violence a "family dispute" on Tuesday. Five people were still in police custody on Wednesday afternoon, four of them brothers.
Several of them are believed to have been involved in another fight on Sunday outside a church in the area, and a number of them already have police records.
Swedish media suggested that Monday's fatal brawl revolved around a man and woman who had separated a few years ago.
Among the four brothers being held by police, two, aged 40 and 35, are suspected of murder. The younger two are suspected of abetting murder. Between them, their criminal records include narcotic crimes, weapon crimes, and abuse.
The fifth person being held is suspected of attempted murder.
Six people were taken to hospital following the melee, but only one remained in care on Wednesday afternoon. Medical staff said his condition was life-threatening but stable.