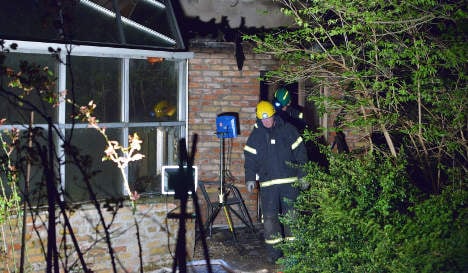 Photo: Johan Nilsson/TT
The fire began at around 10pm on Wednesday in the Helsingborg Zoo. Three fire trucks and over two dozen firefighters were soon on the scene, managing to extinguish the blaze in about an hour.
"I guess you could say that this could have been a lot worse," zoo owner Mats Hafström told the TT news agency.
"A number of spiders are gone but most of the animals survived. It's lucky that there are a lot of water-dwelling animals as birds and mammals wouldn't have survived the smoke."
The 200-square-metre building that caught fire was housing the zoo's rare Chinese alligators.
The cause of the fire remains unclear.
"We don't know anything yet," Hafström said, adding that a radiator in the building may have led to the blaze.
The zoo also made headlines in September when two venomous vipers vanished without a trace.