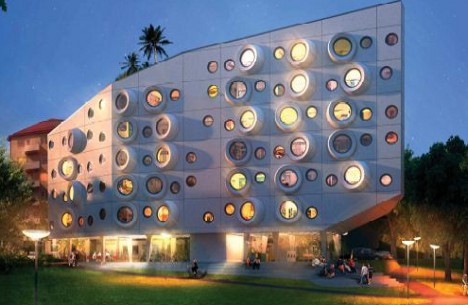 The forty-flat student housing going up in Gubbängen. Photo: Utopia

"Liljeholmen is one of the neighbourhoods which will be the most built up," Nordin said in a statement. "In 16 years, Liljeholmen will be part of inner-city Stockholm."

IN PICTURES: Stockholm new-builds chip away at housing shortage

City hall has far-reaching plans to add 140,000 new homes leading up to 2030. There are, however, significant housing challenges for the city's politicians. The urbanization rate amounts to two busloads of new residents showing up in Stockholm – every day.

Housing security also presents a challenge. Sveriges Radio (SR) reported earlier this month that one in ten children who attend the Bredäng School just south of the capital do not have a permanent home to return to at the end of the day. Their families either sublet with little security, or live in emergency housing. Some live in hotels.

READ ALSO: Stockholm has to fix its housing problem

Many university students have also faced an uphill struggle to find a home. A few projects are underway, with housing on the KTH Campus and in Gubbängen entrusted to the Utopia architecture firm.

"It's fun that the construction companies give the architects free rein in this way," city hall politician Regina Kevius said in a statement when pictures of the suburban spaceship hotel were released.