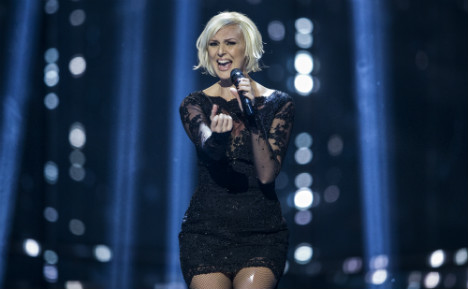 Nielsen, 29, competes in the first semi-final on Tuesday (6th) in Copenhagen with the track Undo, aiming to make Saturday's final in the Danish capital.

After appearing in rehearsals in a new lace outfit the singer was quizzed by reporters if she had to show more skin at the showpiece event.

"No, not at all. But this is a chance to introduce myself to Europe and then I want to be my radiant self," Nielsen told Aftonbladet.

She added; "It (the dress) felt very good…I feel beautiful, sexy and dignified."

Sweden are currently the second favourites, behind Armenia, to win the Eurovision for the second time in three years. Nielsen's ballad has attracted a strong following from music fans and a substantial Swedish contingent is expected to cross the Öresund bridge to cheer her on.

"It's super fun to perform here. It's not difficult as I'm used to stand on a stage and perform. The only difference is the atmosphere, that I'm finally here," she told Eurovision.tv.

Nielsen finally achieved her goal of representing her country at Eurovision by clinching Melodifestivalen, at the seventh attempt, in dramatic style last March.

Despite the backing of bookmakers and music fans, her song Undo has come in for criticism.

The Local's music columnist Paul Connolly said it "sounds like a song Celine Dion would reject for being too wet."

Ahead of her performance in Tuesday's semi-final the singer said; "I just want to enjoy every single minute of this, I really want to be focused.

Sweden has won the Eurovision Song Contest on five occasions, the first win was 40 years ago with Abba and the track Waterloo which catapulted the quartet to world fame.