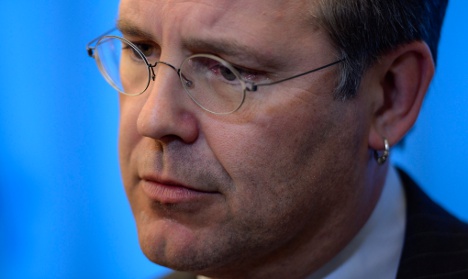 When Anders Borg travelled to Brussels on Tuesday for an EcoFin meeting, he took the chance to speak with his British counterpart George Osborne about the potential takeover of the company which has its headquarters in London.

"From a Swedish point of view we are worried by Pfizer's bid on AstraZeneca," Borg told reporters in Brussels. "Pfizer, as you know, took over (Swedish drugs company) Pharmacia a few years ago and made quite strong promises that they would prioritize and invest in research in Sweden."

"What we see today is that those promises had very little effect," Borg said.

"There are only scraps left of Pharmacia," noted pharmaceutical industry expert Torun Nilsson in an interview with The Local on Monday. She deemed it unlikely that AstraZeneca would ultimately fight off the Americans.

Borg added on Tuesday that he did not like Pfizer's reasons for moving ahead.

"We're worried by the logic of Pfizer's bid that rests heavily on taxes," the finance minister said. "It looks like a deal that's driven more by tax logic than business logic and that doesn't bode well going forward."