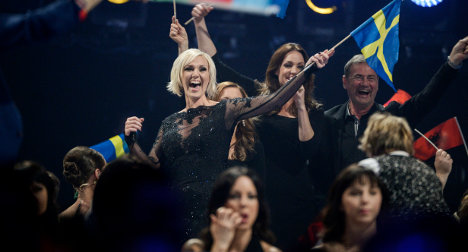 Photo: Janerik Henriksson/TT
Sanna Nielsen and her grammatically intriguing ballad "Undo" brought in huge cheers on Tuesday night in Copenhagen as the Swede was voted through to the final on Saturday.
Sixteen countries performed and were whittled down to ten based on the audience voting (full list below).
One of the biggest showdowns of the night, however, was between Ukraine and Russia. When the Russian entry was voted through to the final, the sister act was met with boos from the crowd. The situation in Crimea has caused a headache for Eurovision vote counters, who were unsure whether votes called in from the area should count as Ukrainian or Russian.
"If the people in Crimea remain on a Ukrainian mobile network, as they are now, their votes will count for Ukraine," Eurovision spokesperson Jarmo Siim told the Wall Street Journal (WSJ) on Friday.
Incidentally, both the song by the Russian entry – the Tolmachevy Sisters – and the song by Ukraine's Mariya Yaremchuk were written by Swedish songwriters.
The tunes were penned by John Ballard and Sandra Bjurman respectively, noted the Skånskan newspaper.
The favourite to win this year is Armenia, whose contestant will sing first on Tuesday night. Oddschecker tipped Sweden for second, followed by the UK and Ukraine.
Full list of contenders who made it through:
Armenia: Not Alone sung by Aram MP3
Sweden: Undo sung by Sanna Nielsen
Iceland: No Prejudice sung by Pollapönk
Russia: Shine sung by Tolmachevy Sisters
Azerbaijan: Start A Fire sung by Dilara Kazimova
Ukraine: Tick-Tock sung by Mariya Yaremchuk
San Marino: Maybe (Forse) sung by Valentina Monetta
Netherlands: Calm After The Storm sung by The Common Linnets
Montenegro: Moj Svijet sung by Sergej Ćetković
Hungary: Running sung by András Kállay-Saunders
The second semi-final will be held on Thursday, May 8th, with the grand final to play out on Saturday night. See the official Eurovision site for more details.