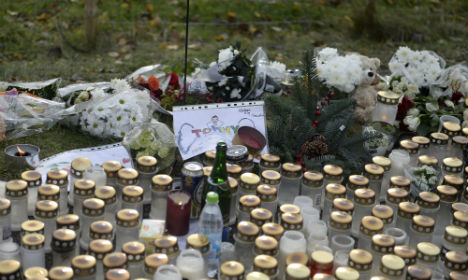 A memorial in Ljungsbro. Photo: TT
The man who killed his victims by hitting them with an iron bar, was furthermore convicted of attempted murder, assault, unlawful imprisonment, trespassing and attempted extortion.
The district court described the killings as characterized by "extreme brutality" .
The man had admitted the murders, saying that "he lost his head" and "was stupid". While an initial psychiatric examination showed the man to have been suffering from a psychosis at the time of the killings, the court concluded that his mental state had been self-induced by taking drugs.
The attacks occurred in the early hours of November 2nd after a woman alerted police that a man had broke into the basement of her house. The man was accompanied by two boys, born in 1998 and 1999. The woman ended up in a scuffle with the man and was able to free one of the boys with the help of her boyfriend.
The man then left the house with the older boy. Another couple who were in a nearby house saw the man and came out to assist. The pair approached the man seeking to intervene after realizing from the screaming and shouting that it was no ordinary argument.
One of the pair, a 57-year-old woman sustained a fatal blow to the head in the ensuing scuffle. After initially being wrestled to the ground the man was able to flee from the scene. When police arrived with dog handlers, they managed to quickly find the man and detain him.