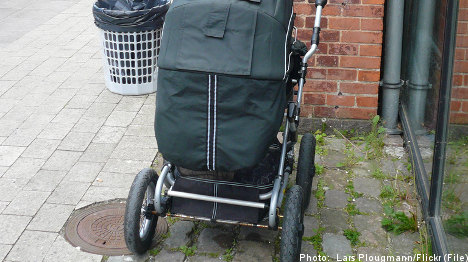 The young boy was discovered on his morning walk in the Navestad district of Norrköping by a concerned member of the public, who alerted the police.

He was pushing his stroller on his own and said he was on his was to daycare, which is typically closed on a Sunday. According to the person who found him, the boy was poorly dressed and frozen.

"We've spoken to him and tried to get his name and those of relatives but we haven't found anything in our records so far. There are many hundreds of apartments in Navestad so we don't have the time to knock on all the doors," press spokesperson Thomas Agnevik told the TT news agency.

The boy was unable to recall where he lived when he was discovered.

Police made a plea through the media for the boy's mother and father to come forward, saying that they hoped his parents had overslept on Sunday and not noticed his absence.

After not hearing anything for most of the morning police were finally able to reach the boy's mother just before lunchtime. He was temporarily placed in the custody of social services while his parents were traced.

"She had been asleep due to illness and not noticed that the boy had gone out," a spokesperson for the police told TT.

"It was not the first time (this happened). The boy is prone to making bids for escape. Now they will put extra security measures in the home for it not to happen again," Anders Arvidsson of the local police told the Norrköpings Tidningar.

Police do not suspect any crime has been committed and the boy has since returned home.