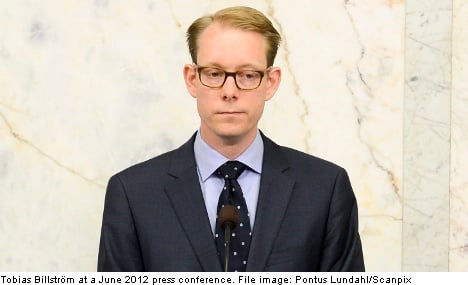 "I am very worried about what will happen if we have a shift in the government," Migration Minister Tobias Billström told The Local, citing figures that one in four employers struggles to find the right person for the job. For many years, Swedish employers who wanted to recruit from outside the EU had to tell the national jobs agency (Arbetsförmedlingen) that they could not find staff with the right skills in Sweden. It was then up to the agency to decide whether the company could go ahead. In 2008, however, the labour-market assessment (arbetsmarknadsprövningen) was scrapped. The government, with the support of its migration policy partner the Green Party, enacted reform meant to stamp out paperwork, delay, and uncertainty – as well as make Sweden a go-to destination for job seekers. Member of the opposition, however, have said the goals of the reform were far removed from the results of the reform – with reports of employment visas for sale, among other irregularities. "It's not IT people who are coming" Ali Esbati, Left Party MP, said at a labour-market conference in Stockholm on Tuesday.

"The number of engineers who have come to Sweden since 2008 has gone down." Instead, Esbati argued it was unskilled labour that had arrived in Sweden. "We have seen a significant increase in the restaurant and cleaning sectors," he noted. His party would like to involve the jobs agency yet again, by reinstating the labour-market test. Employers would have to apply bring in non-EU workers, and it would anew be up to Arbetsförmedlingen to assess whether the would-be worker's skills match the needs of the Swedish jobs market. The Left Party has also said employment contracts should be binding, which, Esbati argued, would make it harder for employers to exploit and to leave migrants suddenly without jobs. Billström, however, thought such proposed reform would only cut off Sweden's access to the non-EU labour force at a time when the country needs it more than ever. With an ageing and shrinking population, Sweden would only see grave repercussions in the economy, he argued. Billström dubbed the labour-market test "crude". "It's not always possible to articulate exactly why a person is needed," the minister told The Local. "We talk about lists of (desired skills). That's a very, very crude instrument in a time when language, experience, and  craftsmanship – whether for an engineer or a cook – is so highly fashioned," he said. "It's not that easy to put on a list."