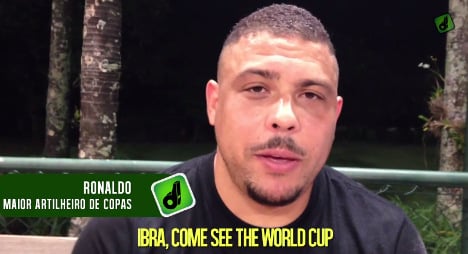 Ronaldo joins in. Screengrab: YouTube
Twitter has been awash with the hashtag #VEMIBRA over the past two days. But what does it mean?
"Vem Ibra", or "Come here, Ibrahimovic" in loosely translated English, is the name of a new two-minute YouTube video targeting the Swedish striker and encouraging him to come to the Football World Cup in June and July.
The video shows Zlatan and Sweden getting kicked out of the World Cup qualifiers by a grinning Cristiano Ronaldo, and then cuts to headlines quoting Zlatan after the game where he told reporters that a World Cup without him in it wasn't worth watching anyway.
On Monday, a video was uploaded to YouTube showing members of the Brazilian public and some recognizable Brazilian football stars urging the Swede to come visit them anyway.
"Vem Ibra," they say.
Top footballers Dani Alves, Raí, Bebeto and Ronaldo all chime in with messages urging Zlatan to come. The public joins in, and an organizer suggests viewers flood Ibrahimovic's Twitter and Facebook feed with invitations to the World Cup opening game.
The video, which is spliced with some of Zlatan's greatest goals and cheeky field antics, has been viewed over 500,000 times in just two days. And in the early hours of Wednesday, the Brazilians got their response.
"Brazil!" the Swede tweeted. "I think I’ll have to change my vacation plans… ;)"