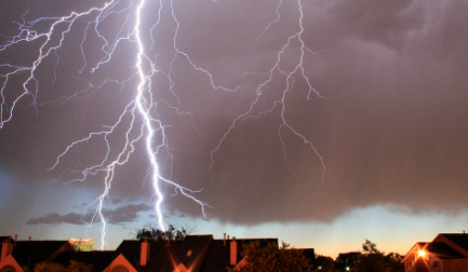 The turbulent weather is now forecast to head north through Sweden over the weekend.

"We have had 150 lightning strikes in the past ten minutes. We routinely send out a warning if we get more than 30-40 in a limited area, so this is several times more," said Ibrahim al-Mausawe at meteorological agency SMHI.

The overnight storms were followed by a slew of reports of flooded cellars. In Östraby in central Skåne 14 millimetres of rain fell in less than 90 minutes.

The storms stretched as far north as Borås in western Sweden during the night with reports of a barn in the area having been hit by lightning. Fire services battled the resultant blaze for several hours on Saturday morning.

The barn was completely destroyed but no casualties were reported as there were no animals in the building at the time.

The weather front passed over Kristianstad on the east coast shortly after 3am on its way north, sweeping over Lake Vännern and into Värmland. The storms are expected to move north-west towards Norway.

Eastern, more populous parts of Sweden are unlikely to be spared however with a new front pushing in over the provinces of Götaland, Svealand and southern Norrland sett for rain and thunder.

"Local showers can be very heavy with a lot of precipitation in a short space of time," said Therese Fougman at SMHI.

Fougman warned of the risk of flooding and water on roads but said there was little people could do to prepare.

"But one can prepare oneself mentally," she said.