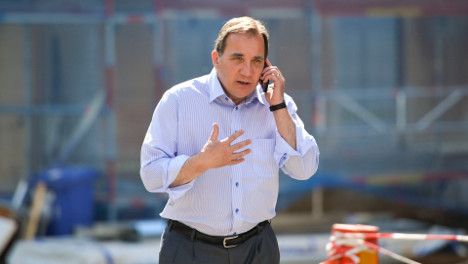 Social Democrat leader Stefan Löfven. Photo: Henrik Montgomery/TT
The results saw the Social Democrats earning 35.3 percent of support compared to the Moderates' 22.7 percent, according to the May Political Party Preference Survey carried out by Statistics Sweden (SCB). The survey asked respondents who they would vote for if the election were held in May.
The Greens and the Left Party both earned 8 percent of the public support, while the government parties (Centre Party, Liberal Party, Moderate Party and Christian Democrats) would receive 36.8 percent of the votes.
This means the Social Democrats alone have almost as much support as the governing alliance, behind by only 1.5 percentage points.
The Sweden Democrats, meanwhile, received 8.1 percent of support, enough to nudge them above the Greens and the Left Party to be Sweden's third largest party.
The Feminist Initiative, which earned its first seat in the European Parliament on Sunday, earned 2.5 percent in the survey.
The survey was carried out before the results were in for the EU elections, between the May 2nd and 25th, and was based on telephone interviews with 9,085 people.
It showed a similar picture to the results of the EU election, but with a few notable differences. The Greens, who earned 15.2 percent in the EU and became Sweden's second largest party, dropped down to equal fourth on 8 percent.
The Christian Democrats, who have been "staring oblivion in the face" according to one analyst, sunk below the 4-percent parliamentary threshold, but earned 6 percent of votes in the EU on Sunday.