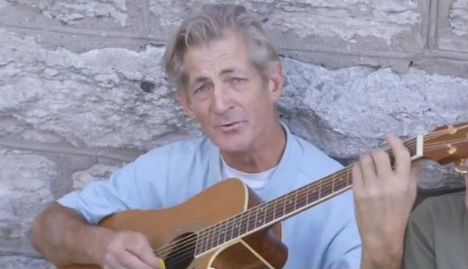 Seegers, 62, featured on the popular SVT show 'Jills Veranda' earlier this year. The street performer, who has admitted to living rough in the past, was catapulted to stardom after performing his song 'Going down to the river' on the programme.

It then rocketed to number one on the Swedish iTunes chart. Swedish fans have since uploaded their own version of Seegers' hit song to YouTube, while a few of them have even gone all the way out to Nashville just to meet the singer in person.

Seegers is now packing his bags for a summer tour of Sweden and will perform with Swedish country icon Jill Johnson, who discovered the street musician when recording her self-titled tv show.

“I have never talked about myself this way in my entire life, you gotta believe me,” Seegers told America's Public Radio International (PRI).

He added; "But I am famous in Stockholm, Sweden and in Nashville, no one knows who I am.”

After being plucked from obscurity the singer-songwriter was asked to record an album by Swedish producer Håkan Olsson.

The producer then booked him for a 60 date Scandinavian tour, where he will open a festival featuring legends like Neil Young and Van Morrison.

“There's a lot of performing on TV shows and it’s very very rarely that it had that kind of impact that Doug had on the Swedish audience, Olsson told PRI.

The Swede added; “The first time he performed on the TV show and it was a complete knock out."

Seegers didn't even have a passport before he hit the big time in Sweden and is lapping up his new found fame.

"The responses that I've got has been totally overwhelming to me. I just want to tell all the people of Sweden how much I am looking forward to coming out there and playing for y'all," he told SVT.

Seegers' tour gets under way in Stockholm on June 9th.