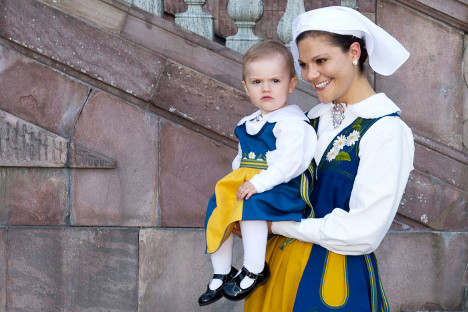 When you hear the words "National Day", you'd be forgiven for thinking it's all about age-old traditional rituals, with raw fish and copious amounts of akvavit.

But it's not. Alright, many people use the occasion as an excuse to bring forth the herring and a bottle of something potent, but 'Den sjätte juni' is hardly a date that trips off a Swedish tongue in the way that Quatorze Juillet does in French. Born on the Sixth of June will never have quite the same patriotic ring as Born on the Fourth of July.

In fact, Swedes didn't even get a day off for it until 2005. For most people, it's just a welcome day off in the early summer, especially when it falls on a Friday and offers a long weekend.

But if it happens to fall on a weekend, that's tough cheese for you. This is a sore point for many Swedes, who preferred the old holiday Whit Monday – the day after Pentecost. This always gave a nice long weekend. Since National Day replaced Whit Monday, the holiday gets swallowed up by the weekend roughly twice every seven years.

But what exactly is it supposed to celebrate?

A more difficult question to answer than you might expect. Unlike other countries, which have anniversaries of independence or revolutions to commemorate, Sweden has never been occupied and has never got rid of its monarchy.

If you ask a Swede, they'll probably mumble something vague about Gustav Vasa.

The day does indeed coincide with the anniversary of Gustav Vasa's election as Sweden's king in 1523, marking the end of the union with Denmark and the start of a new period of closer unity within Sweden. This day was celebrated from the 19th century as a national day of commemoration.

June 6th was also the day in 1809 on which Sweden adopted a new constitution, something it did again on the same date in 1974. From the 1890s, the Skansen open air museum in Stockholm started organizing patriotic celebrations on June 6th. In 1916, the day became The Swedish Flag Day.

Who decided to make it into Sweden's National Day?

National Day was first recognized officially by the government in 1983, but it only became a public holiday in 2005, after years of debate. The official hope was that it would be a day of unity for the Swedish people. Others saw it as a sop to industry, who would now be able to squeeze more working days out of the masses in the name of patriotism.

I want to join in the celebrations – how should I do this in a typically Swedish way?

The truth is, there are no real traditions yet. Dancing round Maypoles is really reserved for Midsummer, later this month. Until it became a public holiday, the only visible signs of National Day were the flags flying in people's gardens and from buses and trams.

These days, the royals celebrate the day by taking a carriage procession from the Royal Palace in Stockholm to Skansen. The Swedish flag is raised and bouquets are given to the Queen and princesses.

A growing tradition is for town halls up and down the country to hold citizenship ceremonies for new Swedish passport holders – in fact, this is often the aspect of National Day that attracts the most media coverage.

Well, unfortunately not. The other groups who like to mark National Day are right-wing and left-wing extremists. Police are expected to be out on force on the big day to keep the rival groups apart. Reports of assaults usually accompany the celebrations in Stockholm.

Don't like the sound of that – what should I do instead?

Do what many Swedes do whenever there's something to celebrate: buy a few jars of herring (in a sauce of your choice), a bottle of O.P. Andersson snaps, boil a few potatoes and serve up a punnet of strawberries (Swedish of course). Serve them in the garden, or – more traditionally – in your kitchen after the rain forces you to abandon the pretence that Sweden has a Mediterranean climate.

If that sounds like too much bother, do what many other Swedes do on National Day: nothing at all. You, like them, can use the day to assemble Ikea furniture, lounge about in the sun or catch up on much-needed sleep. IN PICTURES: The royal family at last year's National Day at Skansen