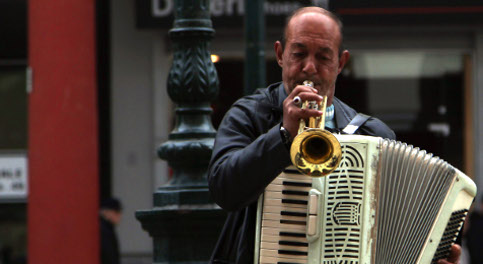 Swedish entrepreneur Max Valentin is raising money to take a dozen Romanian street musicians to Sweden's most prestigious political event – Almedalen Week (Almedalsveckan) on the island province of Gotland, which takes place from June 29th to July 6th this year.

"I want to take them to a musical meeting with educated folk musicians and show what free movement within the EU means, in terms of new rhythms, thoughts, and possibilities," Valentin explained in the project's video. "Both for us and for those who come to Sweden to earn their bread and butter."

Valentin recruited Romanian musicians from the Stockholm metro system, giving the project its name – Tunnelbanan till Almedalen (Metro to Almedalen).

The plan is for the Romanian street musicians, in cooperation with several Swedish folk musicians, to play tunes including a mash-up version of the Swedish national anthem on Tuesday, July 1st. Each day at Almedalen is hosted by a different party – and Tuesday just happens to the day of the Sweden Democrats (Sverigedemokraterna), a far-right party known for its strong stance against free immigration and what they insist is 'organized begging'.

"Tuesday is as good a day as any other," Valentin told The Local. "It’s a day where there will definitely be lots of polarization, and one thing that makes people join together most is music. Music can break down barriers. It’s a good way of trading dialogue."

Valentin hopes that the performance will lead to meetings with the politicians attending Almedalen Week as well.

"If the politicians meet them eye-to-eye, it will be easier for them to see that they are just people, not so unlike themselves," Valentin told The Local. "I believe that innovation is the result of relations. The first step of creating innovation is bringing people together so we can deeply understand the problem we are addressing."

He also hopes that meeting politicians will help promote discussions about mobility within the EU, as well as how the union can make it easier for Romanians to work in their homeland instead of having to go elsewhere to make a living.

"I am a firm believer in free mobility within the European Union. I find it beautiful," Valentin explained. "Most of our parties are pro-open market within Europe, and my hope is that these politicians stand by their promises.We need to create opportunities for everyone on this continent to have good standards of living. I believe in a warm welcoming and constructive approach."

Valentin's concern is not just that the beggars are viewed as actual people – he also wants to make sure they get paid.

"We live in a society where there's not much cash," Valentin remarked. "We need new solutions for how they can be paid another way." He added that he is unsure what the solution would be, but that dialogue is key to finding one.

Taking the musicians to Almedalen would cost Valentin an estimated 15,000 kronor ($2,258). The money is being raised through Crowdculture, a crowd-funding site co-founded by Valentin.

"The dream scenario is that hundreds of people would each give 150 kronor," he said.